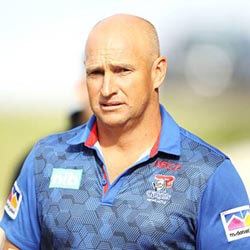 Newly appointed Warriors coach Nathan Brown says he’s very much looking forward to relocating to Auckland. But also, that he’s doubtful of whether this will prove practical as far as the 2021 season is concerned.

At this particular point in time the Warriors appear poised to stay put on the NSW Central Coast – a temporary home the team has been occupying since the delayed start of the current season. Such an eventuality will become a definite reality in the event of current trans-Tasman travel restrictions remaining in place.

At this stage of the proceedings, nothing at all appears to be completely off the table, said Brown of the possibilities currently being weighed up by the franchise. The current indication appears to be that of the team being off to New Zealand, said the recently signed Brown, but nothing is for sure as of yet. Even so, concluded the former Newcastle coach, and all things taken into consideration, the ultimate goal is for him to eventually move his family to Auckland.

Brown previously spent terms coaching Super League clubs Huddersfield and St. Helens, as well as St. George Illawarra. His most recent stint was with Newcastle. Initially led into coaching by a life-threatening neck injury back in 2001, the incoming Warriors coach recently opened up about the incident that nearly ended his ability to walk – let alone play or coach rugby.

Brown describes the memory of for at least 5 minutes following the incident having been completely unable to move, as the stuff of which nightmares are made. The fact that he was eventually able to walk again, said Brown, is according to a top Australian neurosurgeon, nothing short of a miracle.