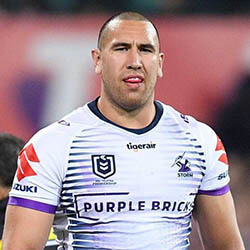 Melbourne Storm’s Nelson Asofa-Solomona is set to miss New Zealand’s upcoming tests as punishment for his involvement in a brawl that took place in Bali. Storm and the NRL also gave the Kiwi prop a suspended NZ$16,000 fine over the incident, but have also stated that he if free to play in round one of next season. Asofa-Solomona will be missing New Zealand’s upcoming match against Australia in Wollongong, along with two tests against Great Britain during the Lions tour of New Zealand and Papua New Guinea.

It strikes a hard blow for the Kiwi side, which have already lost Jess Bromwich due to an injury, along with James Fisher-Harris not long before the NRL delivered the bad news to the NZRL. The global penalty is similar to that of Souths iconic Greg Inglis, who lost his Kangaroos captaincy position and was forced to miss two tests against New Zealand and Tonga a year ago after pleading guilty do driving under the influence. The Storm and NRL integrity unit both investigated the forward’s role in the brawl after a video surfaced of him throwing punches at a man outside of a bar.

It quickly emerged that the 23 year old, who was on a post-season vacation with a group of Storm players, was retaliating to team mate Suliasi Vunivalu being hit. Asofa-Solomona stated that he was in shock after he saw his friend being attacked in the bar, and decided to retaliate outside.