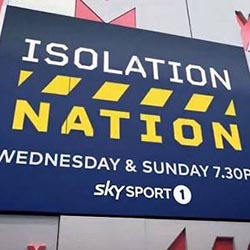 Professional Kiwi Rugby players have come together to create a unique, very entertaining new series. They’ve named it Isolation Nation, in a nod to the measures being taken nationwide to combat the coronavirus COVID-19 pandemic, and you will be able to watch it twice a week if you tune in to Sky Sport.

The show is a result of the combined efforts of New Zealand Rugby, the NZ Players’ Association, and the five Investec Super Rugby teams, and it will debut on the 1st of April 2020.

Former Rugby Union player and 2011 World Cup All Black winner Israel Dagg and journalist and presenter Kirstie Stanway are set to host Isolation Nation. It will be screened on Sky Sport 1 and the company’s social media channels on Wednesdays and Sundays at 19:30.

Each episode will see sports fans invited into the homes and private lives of the stars of the New Zealand Rugby scene as we all try to cope with the new normal being impressed on us by the COVID-19 lockdown. Hosts will include players from the Blues, the Chiefs, the Crusaders, and the Highlanders teams, as well as members of the Black Ferns, the Black Ferns Sevens, and the All Black Sevens squads.

You’ll be able to find out more about the players’ hobbies, whatever hidden talents they may possess, and how they plan to keep their kids entertained, along with information on their exercise and diet regimes and special training tips.