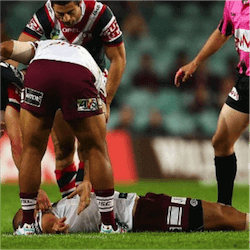 A recent study has suggested that repeated concussions to rugby league players will have a lasting effect on their brains. In 2015, a rule was implemented saying that players suspected of having a concussion would have to undergo a formal head injury assessment before being allowed back onto the field. However, just this weekend, two players were allowed to continue without proper checks after getting knocked down.

Neuroscientist Dr Alan Pearce recently completed a study comparing 25 former NRL players with men of similar age. What the La Trobe University study found was that the men, now in their 50’s had worse memories and slower reaction times. The men carried out various cognitive tests to measure their attention spans, memory and motor skills. Their reaction times were also tested as well as fine dexterity.

According to Dr Pearce, the responses of the former rugby players were significantly different when compared to the control group with no history of head injuries. The data also correlated to the tests done on cognition and motor reaction times, which were significantly slower in the former rugby players. Dr Pearce hopes the results of the study can be used to start a rehabilitation program for the former players. According to Pearce, neuroplasticity could be used to help the players recover damaged brain function.

What this means is that the participants would have the brains “rewired” in order to improve their motor functions and memory. Pearce said that they have seen improvement results in areas such as stroke or Parkinson’s where the participants do exercise therapy. Dr Pearce will present his study at the World Congress of Brain Injury in the USA. The results of the study have proven timely. It was just last month that James McManus lodged a lawsuit against his former club Newcastle over how it handled his concussions.

Over this past weekend, Brendon Elliot, the Newcastle Knights fullback was allowed to head back onto the field after taking a serious knock to the head in the first half. Elliot’s first hit came in the 25th minute and despite the fact that he lay on the pitch for several minutes, no head injury assessment was conducted. When Elliot went down again in the second half, he was taken off the field. According to Dr Pearce, a formal assessment should have been conducted.  The NRL is also looking into a second incident where Josh Dugan went down after being elbowed in the jaw.