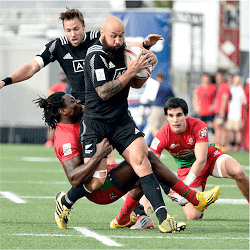 World Rugby Sevens 2016-17 has been frustrating New Zealand supporters since the tournament started in December. In the Las Vegas Sevens last weekend, coach Scott Waldrom’s side made it to the semis for the third time in the five rounds played so far, but once again failed to convert to a final.

South Africa and Fiji have both been formidable in this Sevens tournament, with the Blitzboks knocking out New Zealand in the quarterfinal in Dubai and the semi-final in Cape Town, and Fiji doing the same in Wellington and Las Vegas. In Sydney, it was England’s turn to beat New Zealand in a semi.

Things were looking good in Las Vegas on Saturday, when New Zealand beat England in their quarterfinal, but the wheels came off the next day. Fiji put paid to New Zealand’s hopes with a 19-14 victory, before losing 19-12 to South Africa in the final.

The Blitzboks have now won four of the tournament’s five legs, and sit at the top of the ladder with 107 points. New Zealand, after losing 19-15 to the USA in Sunday’s play-off, finished fourth in the Las Vegas Sevens and remains fourth on the ladder overall, with 71 points.

Coach Waldrom to Focus on Discipline

With Fiji on 83 points and England on 81 currently second and third on the ladder, New Zealand is not the only side with a mountain to climb over the competition’s last five rounds, if they are to catch up with the South Africans.

Coach Waldrom said after the Las Vegas Sevens that he felt consistency and discipline were letting the side down, and he planned to target both areas in training. Betting fans can watch this weekend’s Canada Sevens in Vancouver, to see if his strategy yields any improvement.