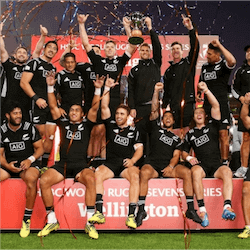 It may have come prematurely, but New Zealand has finally won a Rugby Sevens Series tournament as they defeated Argentina by 38 points to 14 in the finals in Cape Town. The new-look side, under coach Clark Laidlaw, played a much closer game against England in the quarter finals and triumphed against the reigning champs, South Africa in semis.

After finishing runners up last weekend in Dubai, New Zealand now take a narrow lead in the overall standing with 41 points while South Africa trail by two. It wasn’t all sunshine and roses for New Zealand though. They started the second leg with a massive 22-0 loss against the United States but managed to bounce back with a convincing win over Spain and Australia to secure a spot in the top 8.

Argentina made it to the final with surprise victories over the United States and Canada. Their momentum crashed when they came up against New Zealand though. Making a string of unforced errors, the Argentinians were completely outplayed. The first kiwi try came from a crooked lineout with Joe Ravouvou shrugging off a few players to make his way over the line.

A knock-on scrum also led to a try for New Zealand with Vilimoni Koroi having little to do at the end of the field. Argentina managed to pull one back with a try and conversion just before half time by Lautaro Bazan Velez. In the second half, Argentina were desperate to score first but failed to mark Tim Mikkelson who added yet more points to the New Zealand scoreboard.

A second try from Ravouvou put New Zealand in a commanding position at 31 points to 7 before Luciano Gonzalez scored a consolation effort. It seemed the match was over but New Zealand has one more in them with Sione Molia racing over the line more than a minute after the hooter sounded.

South Africa, who failed yet again to win in Cape Town, finished in third spot after edging Canada 19-17 in the bronze play-off. The Blitzboks were involved in one of the most exciting matches of the day. With the home crowd cheering them on, they came from 16 points behind in the quarter finals to eventually beat Fiji by 31 points to 16.