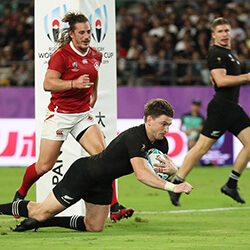 The gap between New Zealand and Canada in the 2019 Rugby World Cup has widened after the Kiwis beat their Canadian opponents 63-0. The Pool B match played out in sweltering heat in a dome stadium at Oita, Japan, and ended badly for the Northern American side. The All Blacks victory saw praise from across the world, with many calling it a slick and lethal performance.

The match also saw the Barrett brothers making history by being the first familial trio to take to the field for their country, while also claiming the most tries on the board. It’s been hailed as one of the biggest thrashings of recent times, and could only be matched by New Zealand’s famous win during the 1995 Rugby World Cup.

Notably, player Ardie Savea, who made news by being one of the first players in history to wear protective goggles due to a bad left eye, was seen throwing them aside not long after entering the game. The flanker went on to the field during the 70th minute, and removed the goggles 10 minutes into his play. After the match, many of his teammates commented on his new accessory, with Richie Mo’unga saying that he supported Savea’s choice to protect his eyesight, and even stated that he was curious if there were more pairs available. Ian McKinley, the Italian player who has worn goggles since 2014, said that Savea’s choice to wear goggles was a courageous decision.