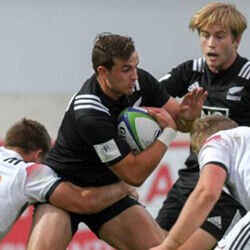 New Zealand’s hopes for defending their under-20s World Cup title have been dashed after a loss to France that saw the New Zealanders being outplayed during the semi-final of the championship.

The match was played at the Aime-Giral Stadium in Perpignan had a packed audience of 15000 people, where the French beat their opponents for a total score of 16-7. The win means France will now qualify to play at their first final, which will be against England. This comes after England’s defeat of South Africa at the other semi-final, which saw a final 32-31.

New Zealand, who has won the title six times in the past, are now delegated to battle South Africa for the chance of a bronze medal, with the match taking lace in Beziers.

Missed tackles was one of the major failing points for the New Zealand team, forcing them constantly into tight spots where France had the upper hand. The first try of the game only came at the 30th minute in the form of a penalty to Louis Carbonel. Before that, France was growing frustrated at the number of times they had missed line out drives in the New Zealand 22.

This changed in the second half, as France quickly made up ground, with Matthis Lebel landing a try just three minutes in. The curve continued upward for the French, finally culminating in one last effort by New Zealand by the 70th minute that was not enough to bring them back.