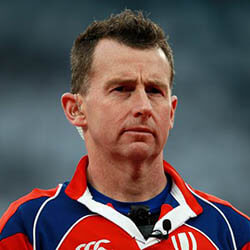 Welshman Nigel Owens will take the field as referee for the upcoming All Blacks World Cup quarter final match that will be played against Ireland in Tokyo. The other quarterfinals will see Frenchman Jerome Garces in charge of the Australian-England fixture in Oita, while the games next day South African Jaco Peyper will be refereeing the Wales versus France match. Englishman Wayne Barnes has the match between South Africa and hosts Japan that is set to take place in Tokyo again.

The two New Zealand referees at the event both have assisted ref roles for the quarterfinals. Ben O’Keeffe will be on the sidelines for the Japan-South Africa game, while Pail Williams is the second assistant referee for the Wales-France fixture. Fellow Kiwi Ben keen has been named as the television match official for the England versus France match.

All Blacks assistant coach Ian Foster played a straight hand against Owen’s appointments. He told reporters that they are happy with whoever they get, and at this stage of the tournament, he is sure that World Rugby have worked hard to acquire referees that are best suited for managing the teams, and that it was neither good or bad.

World Rugby stated that the appointments followed a full review of performances that was taken out over 37 pool matches. The referees have been in the spotlight during the tournament, with an increase push by World Rugby to police high tackles in particular this season.