No Kiwi Coach for Springboks 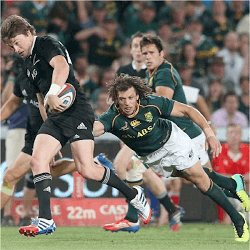 Paul Lewis Says it Would be Crazy to Coach South Africa

There are a number of things that would be more likely to happen than almost any New Zealander being persuaded to coach the South African rugby team in the environment which currently characterises this sport:

The point of these statements is to illustrate just how unlikely it is that anyone of sound mind would even attempt to take on the Springbok rugby team as a coach at the moment. While it is very flattering that the media in South Africa are shamelessly begging for a New Zealander to tighten up their flagging rugby team, Dave Rennie, coach for the Chiefs, and anyone else they may have the temerity to approach should run a mile!

Rennie was named as a prospect when it seems that South African rugby folk attempted to undermine his two-year move over to the Glasgow Warriors. The end of next season will see his contract with the Chiefs come to an end and, although he has not made a secret out of his ambitions in terms of an international move, he has also indicated that these will be brought to fruition sooner rather than later.

This week, however, highlighted the progressively more frantic notion from inside South Africa that a New Zealander, almost any New Zealander, was required at the helm to replace current coach Allister Coetzee, who has had the dubious honour of controlling the chair over the worst-ever season in Springbok team history. They looked at the achievements of Warren Gatland; Joe Schmidt; Vern Cotter; and Highlanders coach Jamie Joseph who signed up for Japan. John Plumtree, of the Hurricanes, and even pop-psych John Mitchell, All Black rugby’s Yoda, was mentioned.

Why the Springbok Rugby Team is a No-Go

The Springboks suffered the ignominy of their first-ever home defeat to the Irish; lost to Argentina; and had to bear an exceptionally humiliating loss to the second-string Italians, who have thus far never managed to get within 16 points of a win when playing against them.