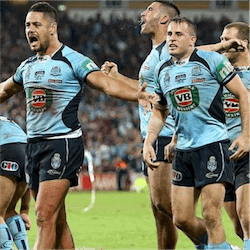 New South Wales, the pre-game favourites for the State of Origin opener, more than lived up to their tag with a massive 28-4 victory over Queensland in Brisbane. The Blues completely overwhelmed the Maroons at Suncorp Stadium to claim an early lead in the three-game series. Tries by Mitchell Pearce and James Maloney took the visitors to a 12-4 lead at halftime. The only points for the Queensland side came from a Corey Oates try off a cross-field kick courtesy of Cooper Cronk.

In the second half, the blues were looking to build momentum before Pearce received a head-knock and had to be assisted off the field. Jack Bird came off the bench, taking up the role of five-eighth with Maloney filling in as halfback. This sort of interruption would have spelled disaster for the Blues in day gone by, but this time the visitors turned up the heat and demolished the home side.

James Tedesco, debuting as fullback for the Blues scored just minutes after Pearce left the field. Then it was the turn of front-rower Andrew Fifita to put his name on the score-sheet along with centre Jarryd Hayne. Maloney finished out the game with a set of four conversions. The sensational win by the Blues means that the team is just one game away from claiming their first series win in 12 years.

A Tough Loss for Queensland

Despite the score-line, the quality of the match was top-notch with loads of pace and plenty of action. The first quarter flew past without any stoppages and one penalty going to either side. The ball control for both sides was equally impressive with the Maroons holding all of their 18 sets in the first half and the Blues finishing 18 of 19.

New South Wales gained the upper hand with front rowers Aaron Woods, Andrew Fifita and David Klemmer demolishing the Queensland line. At the same time, back-rowers Boyd Cordner and Wade Graham gave the front a bit of thrust out on the edges. Queensland had a chance to open the scoring in the 5th minute but NSW managed to turn the tables on the home team and move the ball into attacking territory. Maloney picked up an offload by Fifita and scored under the bar before converting to make it 6-0 with just seven minutes on the clock.