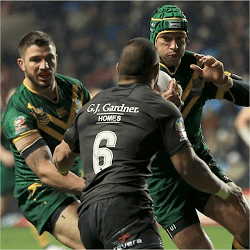 In the Four Nations final, Australia ran rampant over the Kiwi NRL team at Anfield, and when the final whistle blew the score was a rather embarrassing 34-8. The New Zealand team was dealt a crushing blow by the Kangaroos win, as not only were they stripped of the chance of claiming the 2016 Four Nations title, they also allowed Australia to slip in and take their  number one spot in the World Rugby League rankings.

The Kiwis were literally overrun in the game, and meekly handed Australia the title they had fought so hard to win in 2014. The Kangaroos, led by Mal Meninga ran in six tries over the course of the match, and from the minute they went onto the field they made their intentions abundantly clear. Only two minutes in, a scrum saw Darius Boyd pass the ball to Blake Ferguson, setting the Kangaroos up for their first try.

Initially New Zealand responded in a positive fashion and both Jason Taumalolo and Adam Blair made runs to break into the Australian half, only to pass to Shaun Kenny-Dowall who fumbled and dropped the ball, missing out on what seemed like the perfect opportunity to score. This seemed to almost herald the beginning of the end for the Kiwi’s, and they seemed to lose confidence and began making rookie errors that cost them dearly.

No matter which way the Kiwi’s went, Meninga’s team thwarted their every move and cut them off successfully almost all the time. By half time the Kangaroos were leading 24-0 and the Kiwi team looked beleaguered and a bit out of their depth.

A Second Half Onslaught

Anyone who thought the Kiwis would make a comeback in the second half was badly disappointed, as the Kangaroos continued their onslaught as soon as both teams were back on the field. The Kiwi team tried camping out on their try line, but this backfired when Rapana was forced to leave the field for a concussion test and the backline was reshuffled. This shuffle however seemed to give the Kiwi’s a bit of renewed confidence and they managed to score in quick succession, cracking through the Kangaroos seemingly impenetrable defence and earning them 8 points.

It was a case of too little, too late though, and the Aussie team steam rolled the New Zealanders into a 34-8 win, stripping them of their number one test ranking and of the chance to hoist the Four Nations Cup.