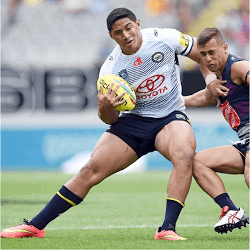 Jarryd Hayne is knowledgeable about what it takes to crack the NFL, and he has stated that he believes that New Zealand native Jason Taumalolo will be able to make the grade.

Hayne was chosen by the 49rs, of San Francisco, last year and has since made a total of eight appearances in the NFL, before the code-hopper managed to switch his attentions to Sevens in June.

Hayne is now back in the rugby league, with the Gold Coast Titans, and joined the 49rs’ practice team at the age of 26. He believes that Jason Taumalolo, at 23 years old, and Valentine Holmes, the 21-year old Kangaroos flyer, have a big advantage on him because they are flirting with the National Football League at a younger age.

Hayne, now 28-years old, has insisted that Taumalolo and Holmes, currently courting NFL scouts in Los Angeles, America, have the talent it would take to successfully transition from league games over to American football.

Hayne told Fox Sports that it was good to see them “really step out”, and that they most certainly had age on their side. He went on to explain that, at the age of 21, the majority of players emerge from the draft at 22- or 23-years old, so Taumalolo and Holmes would have many years under their belts if they did end up pursuing it.

Hayne stated that he had experienced his “pro day” at 26-years old, and that Holmes being five-years younger, and Taumalolo three years, would certainly work in their favour. Hayne stated that the playbook was the most challenging part of play, but their skill and talent would see them through. He went on to wish them both his best.

No Move for Holmes and Taumalolo Just Yet

Holmes and Taumalolo currently play for the Cronulla Sharks and North Queensland Cowboys respectively, and are both tied up in contracts to their National Rugby League clubs for 2017. They have stated that they have every intention of fulfilling their contracts.