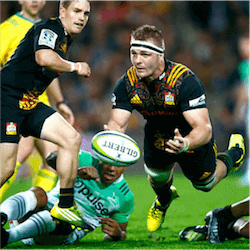 The weekend saw Round 2 of 2017 Super Rugby played out in New Zealand, Australia, South Africa and Singapore. New Zealand betting fans will be delighted with the fact that three local teams remain undefeated, even with six months still left in the tournament.

The Hurricanes and Chiefs are top of the points table on 10, after taking the maximum in Rounds 1 and 2. The Hurricanes, after beating the Sunwolves 83-17 in Round 1 and the Rebels 71-6 on Saturday, are far and away the top team in the tournament on points difference at this stage.

The Chiefs haven’t been quite as impressive, but they still managed a solid 24-15 win against the Highlanders, followed by 41-26 victory over the Blues in Waikato on Friday, winning a bonus point in each. The Crusaders are the third New Zealand team undefeated in the first two rounds, but after beating the Brumbies 17-13 and then the Highlanders 30-27, they have only 8 points on the table.

Highlanders Only NZ Side without a Win

After two defeats, Highlanders fans are hoping the team will pull their socks up soon. They do, however, at least have a bonus point from their Crusaders match. Australia’s Brumbies and South Africa’s Bulls, both defeated twice so far too, have also garnered a single bonus point each.

The two sides on two losses with no points at all after Round 2 are Japan’s Sunwolves and Melbourne’s Rebels, the latter on a massive negative points difference of -103 after two huge defeats. Australian teams are having an uneven Super Rugby season so far, to put it mildly.

Although the Waratahs beat the Force and the Reds beat the Sharks in Round 1, both those teams lost in Round 2. In Johannesburg, the ’Tahs were thumped 55-36 by the Lions, while the Force confounded expectations by beating the Reds 26-19 in Perth.

So all three of the Aussie sides are on one win/one loss so far, with the Brumbies and the Rebels doing even worse with two losses in two rounds. The Brumbies, at least, have managed to take a bonus point away from both defeats.

In South Africa, the Stormers and Lions also came through Round 2 undefeated, with the Lions, on 9, a bonus point ahead of the Cape Town side, following the Waratahs match.