Otere Black Has Recovered And Is Back In Business 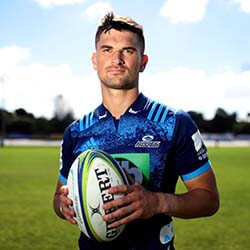 Otere Black has made his triumphant return to rugby just in time for the finals against the Highlanders on Saturday. This is their first shot at the Super Rugby title since their 2003 win against the Crusaders.

This news means that Tom Robinson who had played an important part in leading the team to victory during Black’s absence will not be able to play in the finals. This is in addition to the head injury sustained by last week’s match against the Force. He will be replaced by Akira Ioane.

Ofa Tuungafasi was another player who did not make the cut due to an injury and will be going in for surgery ahead of the Rugby Championship.

Head coach Leon MacDonald was incredibly happy to have Black back on the team and in his customary position. While Black did sustain a minor leg injury on Tuesday, he made it through a full training session and has made a remarkable recovery with the help of the team’s medical staff. The addition of Akira Ioane further adds to the Blues’ edge as they prepare for the finals.

The final is expected to be a high-energy, adrenaline-packed game that will have supporters across the globe on the edge of their seats.