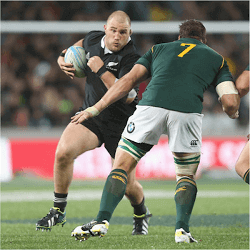 The Head coach of the All Blacks, Steven Hansen announced that tighthead prop Owen Franks has resigned with New Zealand until the next world cup in 2019. Owen is one of the most celebrated players in the All Blacks’ history.

Owen holds the distinction of being the 2nd most capped prop and the 10th most capped player for the All Blacks of all time.

Coach Hansen stated that Owen’s work ethic, shared values and great play has made Owen one of the most sought after players in the world and it is very significant that he chose to recommit to his country.

Owens added that the competitive package they offered him also helped him make his decision.

The team is looking towards a very strong showing in the next world cup and with a star player like Owen Franks onboard, it looks like it will be one to remember.

Making his debut in the Air New Zealand Cup, Owen received 18 caps and wide spread acclaim.  He received his big break in 2009 when his fantastic athleticism won him a contract with the All Blacks.

Owen holds the distinction of being the 3rd youngest prop to ever play for the All Blacks.

Owen also gained some infamy when a story emerged that he celebrated the 2011 world cup victory by the All Blacks by squatting 280 kg weights. Owens also holds the dubious distinction of holding the world record for least tries scored, having a current record of 84 for 0.

Owen’s brother, Ben Franks is also a celebrated prop and he has played many games with his brother.

Since 2011, Owen has dominated the scrum of his team, the Crusaders. Another feather in his cap is the fact that Owen does not just enjoy powerful play; he is also very nimble around the field that he couples with big defensive hits. It is no mystery why he holds the record for least number of tries.

He finds his value in his powerful support of the team, both through defensive and offensive play.