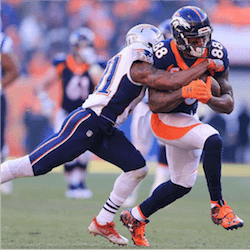 Patriots Crush the Broncos in Denver

The New England Patriots have continued their winning ways with a solid win over the Denver Broncos at Sports Authority Field in Colorado. Tom Brady led the way, throwing three touchdown passes with the Patriots equalling their own AFC record for the most consecutive road victories at 12. The Broncos, crumbled under the pressure, eventually going down 41 points to 16. For Brady, it was a good night as he finally broke the tie with Peyton Manning for the most regular-season road wins at 86.

Both teams have represented the AFC in the past four Super Bowls, so it could have been an exciting matchup. Instead, the Broncos just kind of fizzled out, yet again. The Broncos ended up losing their fifth straight game, officially making 2017 their worst season in seven years. They also have the added accolade of dropping back-to-back games to the Patriots in Denver, something has not been seen since 1966.

Brady, did well to avoid Von Miller and threw 266 yards on 25 of 34 passing. The Broncos are the only team that Brady has a losing record against and this makes his fourth win in the past 11 trips. It seemed that, it was a night for records as the Patriots, for the first time since 1979 had a blocked punt as well as a kick-off return touchdown that resulted in their comfortable halftime lead of 27-9.

A Night for Records and Fluffed Punts

The Patriots started the game three-and out with Isaiah McKenzie muffing the punt, leading to the 14-yard touchdown pass into the hands of running back Rex Burkhead. The Patriots would rack up a further five touchdowns and a set of field goals before they had to punt again. Brandon McManus fluffed the kick-off, failing to get in front of Dion Lewis whose 103-yard return took the score to 14-3.

Burkhead then blocked Riley Dixon’s punt just on the 30-yard line. Stephen Gostkowski did the honours of slotting in their second field goal to take the lead to 20-6. When the Broncos managed to regroup and force another punt in the fourth quarter, they were blown for having 12 men on the field. This gave the Patriots a new set of down and the opportunity to do more damage. Brady handed off a 6-yard TD pass to James White, capping off a 16-play drive that at up most of the remaining time.

Betting on the NFL is easy and you can wager on upcoming games with Sportsbet online sportsbook.