Portia Woodman Dreaming Big Ahead Of 2021 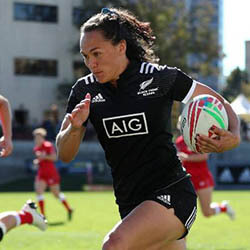 In fact, since she’ll be competing in the Tokyo Olympic Games as well as in the Women’s World Cup XVs Tournament back home shortly after, she may just get to dream about a double gold year ahead.

Woodman during a recent interview spoke about how she believes in the power of visualisation. For her, visualising success means imagining herself running around the sideline. She was however quick to add that it was at the same time also important not to get too far ahead of one’s self.

Participating in both events may require of Woodman to get buy-ins on the idea from national sevens coaches Allan Bunting and Cory Sweeney, as well as the thumbs-up from XVs Tournament boss Glenn Moore. Chances are that everybody’s already on board and eager to make it all happen for the try-scoring machine though.

What helps her cause is that the schedule is more than workable too – what with the Olympics ending on July 31 and the XVs World Cup only kicking off in Auckland and Whangarei on September 18.

As for what the future holds beyond 2021, Woodman says she’s yet to completely make up her mind. On the one hand there’s the prospect of the women’s NRL, which she says is enticing, but other hand there’s Japan and all the promise in terms of women’s athletics and more. For the moment though, Woodman says her focus is on next year, and on the possibility of a double-gold.