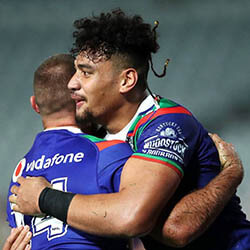 New Zealand Prime Minister Jacinda Ardern has heeded the unusual plight of Warriors duo Selestino Ravutaumada and Eliesa Katoa to the extent that she’s willing to try and find a solution to their having been banned from returning to the country at the close of the current National Rugby League season.

Katoa, who is from Tonga, and Ravutaumada, a Fiji national, have been informed that since neither of them are citizens of New Zealand, they will according to the latest global health crisis guidelines instituted by local government, not be permitted to re-enter the country due to rising public health concerns. Barring a handful of exceptions, only permanent residents of New Zealand are currently permitted to pass through the country’s borders.

Ardern explained the predicament inasmuch as it relates to the two players as that of anyone travelling on a visa no longer being automatically permitted to travel in and out of the country, unless said cross-border travel can be linked directly to the “wider well-being” of the country and its permanent citizens.

This pretty much constitutes the type of logic followed with the America’s Cup. The American and British teams were both granted the freedom of movement in order to come to New Zealand to compete, since the event holds multiple financial benefits for the country. The expectation is that the same leeway will be granted to Italy.

Both players attended school in New Zealand and have been living in the country from a relatively young age. The PM has in the meantime referred to the issue now surrounding the two as unfortunate, unusual and complex.