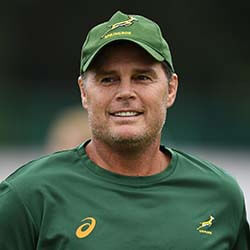 Springboks coach Rassie Erasmus has now offered to “step down” from the remaining two Tests between South Africa and the British and Irish Lions if his stepping aside means fairer treatment and refereeing for his side during Saturday’s second Test.

Erasmus has made no secret of his unhappiness with how the first Test between the two sides had been refereed while going as far as suggesting that several crucial mistakes had been made by Aussie referee Nic Berry.

According to the South African coach, the alleged mistakes had negatively influenced his side during their 22-17 defeat by the Lions. He’s also expressed unhappiness about the measure of respect he says South African captain Siya Kolisi had been shown during the game when compared to how Lions skipper Alun Wyn Jones had been treated.

The South African coach has furthermore minced no words about his unhappiness with Lions coach Warren Gatland’s public questioning of whether South African Marius Jonker should have been appointed TMO for the series between the two sides. Jonker is a good friend of Erasmus, and according to the South African World Cup-winning coach, a man of irreproachable integrity.

Lions skipper Jones has in the meantime attempted to come to the defense of the match officials under fire by Erasmus, saying their decisions are being more closely scrutinised now than ever before in the history of the series.