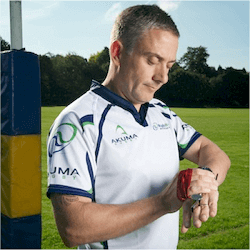 Graham Eddy, an Auckland referee who tragically suffered a fatal heart attack during Friday’s game at Karaka, was a man who wholeheartedly committed himself to everything he put his hand to. Although someone at the game attempted resuscitation and 111 was immediately called, the “unexpected” heart attack on a very fit Eddy proved too much.

Friend and fellow-referee Nigel Bradley met Graham Eddy on the job in Waiuku, and confirmed Eddy’s passion for refereeing and where he was heading with it. Bradley stated that Eddy definitely had ambitions as far as referring premier rugby on a regular basis was concerned, and that the heart attack was a totally unexpected tragedy to have befallen his friend.

Bradley was responsible for bringing Graham Eddy’s wife through to the rugby grounds after the heart attack had occurred, adding that the woman was very distraught. Allie, Eddy’s wife, was given as much support as possible by the other referees present at the game.

Bradley stated that Eddy was a pleasure to work with, and that his well-thought out opinions on the game matched his passion for it, and that the excellent conversations he had been lucky enough to share with Eddy would remain a very fond memory. His love of people and total commitment to whatever work lay in front of him were personality attributes that served him very well in his role as referee, and he was going to be greatly missed by all of those lucky enough to have come into contact with him.

Graham Eddy met Allie in 1995, and their relationship had become an official one by April the next year. The loving pair went on to date for a total of eight years before taking the next step and getting married, and were reportedly as much in love as ever.

A very physical man, Eddy enjoyed snowboarding, and would rise at 04h00 each season in order to hit the slopes by 8h30, before returning home to Auckland by 20h00. He had a number of hobbies besides rugby, and enjoyed rallying; landscaping; general DIY; mountain and road biking; and gardening, and was also a coffee aficionado.

He will be remembered by his family as someone who conversed easily with anyone, loved nothing more than lending a hand to those in need, and among those tragically affected by his passing are his two daughters, Scarlett and Maddie.