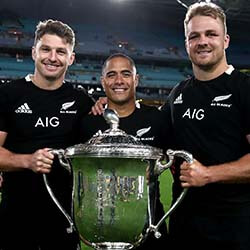 An economically critical Bledisloe Cup is now set to continue as planned after New Zealand earlier this week granted a special travel exemption to the Wallabies, who will now be in a position to enter the country.

The fate of the match was dumped into uncertainty when NZ last week pressed pause on freedom from quarantine requirements between the two countries following a sudden outbreak of infections in Australia. All Kiwis were at the time ordered to return home or stay put while allowed only a seven-day window to do so – which order cast a heavy shadow over the likelihood of the Cup.

Relief came on Monday when acting minister Ayesha Verrall announced the mentioned Wallabies exemption, describing the Bledisloe Cup as an economically critical event for New Zealand at this time. Deputy Prime Minister Grant Robertson added his voice to the announcement by saying the decision to grant exemption to the Australian players and support staff had not been one taken lightly in any way.

According to estimations, a single Test match is worth around $20 million for local New Zealand host regions, with Bledisloe Cup broadcasting rights worth millions more in income for the sport itself.

Robertson explained earlier this week how Test rugby between the All Blacks and the Wallabies is of the best supported among New Zealand sports fans. Robertson furthermore stressed that the Australians have been in a bio-bubble of their own for quite some time now, and that all travel will happen via a closed and chartered flight.