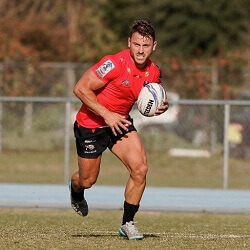 Rhys Jacks Gets Look In at Canada Sevens

When Canada was being put through their paces at a training session on Wednesday, a few days before the weekend Seven Series action, there was one new member in the team. Rhys Jacks, of the Toronto Wolfpack and English rugby league fame had been given a chance to show off his skills and see whether the Sevens team was a good fit.

Jacks says that he managed to secure a spot in the training team using several of his well placed connections and that he wanted to get back to Canada for some time now. He said that he called up McGrath and McGrath said that if he could get over there and show them what he has to offer, they may well find a spot for him in the Sevens team.

It seems like Jacks’ Canadian calling has been especially strong and although he was born and raised Down Under he has a Toronto-born grandfather and can therefor play for the Great White North legitimately. Although the connection may be somewhat slim, it seems to have been pulling him Canada-wards and now he may well have a shot of playing there.

Jacks played rugby union during high school so he says that the rules in Sevens are not hard to pick up and that Sevens is very close to league when it comes to running lines and times. To date, he has spent 2 weeks with the Canadians in Langford, has played in the Vancouver Rugby Festival and now, he is hoping for more.