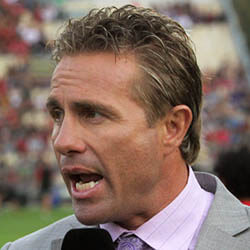 Legend of the All Blacks Justin Marshall has been working on a little project during lockdown and is eager to share the results with New Zealand’s essential workers!

Like many of us, Marshall, who currently works as a Sky Sports Rugby commentator, has seen insecurity springing up around his job, in his case due to the global shutdown of this sector due to the novel coronavirus COVID-19 pandemic.

But he’s turned the downtime into an opportunity, hunkering down in his garage to brew his own brand of beer, named Boomfa, after the commentary call he made famous. Marshall and Aaron O’Donnell, his business partner, registered the trademark for Boomfa early in 2019. O’Donnell suggested that the beer be mainstream instead of craft.

Marshall has reported that, besides trying to stay fit by going running during lockdown, he’s been spending all his time getting his new beer brand up and running. Confessing that keeping trim has taken a backseat as a result, he says he has occasional pangs of guilt because he’s creating alcohol while others try to stay in shape!

He commented that lockdown has given him the space and time he needed to focus on this business. He’s working with Williams Warn, what he calls an excellent brewery, and says that he’s actually been busy most nights as well, wearing a headlamp and tinkering with his recipes.

The 46-year old former halfback has stated that he wants to share his products with essential workers, asking that people contact him on social media so he can share some joy.