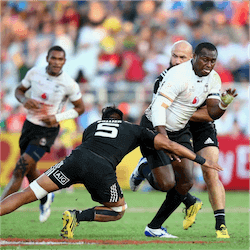 For punters and rugby enthusiasts, the rugby World Sevens Series offers up plenty of sporting action and betting opportunities. Sevens rugby has seen a massive boost in popularity over the past few years. The 2016 Olympic games highlighted the sport, creating a whole new generation of rugby fan. Sevens rugby is based on rugby Union rules but is an entirely different game.

In Union rugby, each half is 40 minutes long with 15 members in each team. With sevens rugby, each half is only seven minutes long and each team consists of seven players. The reduced number of players makes the game a lot faster with far more scoring opportunities. Players can score using the same techniques in Union rugby including drop goals, conversions and tries.

In sevens rugby, the HSBC Sevens Series is the premier competition for competing nations. The world series was first held in 1999 as a competition between the world’s best rugby nations. The 2016/2017 consists of 15 teams with the top teams automatically qualifying for the 2018 Rugby Sevens World Cup. The series consists of 10 international legs held over a period of six months.

Teams earn points for each position achieved on a leg. At the end of the competition the team with the most points are crowned world champions. Of the 10 legs in the 2016/2017 season, six legs have already been played. The first leg took place in Dubai in December 2016. South Africa won the leg with Fiji as runners up. The second leg was held in Cape Town where England won the final with South Africa in Second.

The Third leg of the Word Sevens was held in Wellington. Again, South Africa walked away with top points while Fiji took second spot. The fourth leg moved on to Sydney where South Africa continued their winning streak defeating England in the Final. The competition then moved across to the United States where the Las Vegas leg saw South Africa pip Fiji again in the final. The most recent leg was held in Vancouver Canada. England managed to topple South Africa but are far behind on points at this stage.

The four legs that remain include Hong Kong, Singapore, Paris and finally Twickenham in London. Currently South Africa is leading the points table with a total of 126 points. England is in second place with 103 points and Fiji just behind them with 100 points. New Zealand is in fourth place with 84 points.