Scott Barrett To Be Crusaders Captain 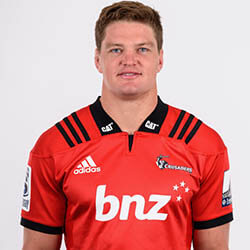 Lock Scott Barrett has announced that he will be the new captain for the Crusaders in the place of Sam Whitelock, who will be absent next year. The 25 year old was able to beat a number of other candidates to the role, including centre Jack Goodhue, hooker Codie Taylor, and loose forward Whetukamokamo Douglas, who had all carried the vice captain tag during the Crusaders’ otherwise victorious campaign for 2019.

Fullback David Havili, who had recently captained Tasman to their national provincial crown, was another potential candidate for the position. But coach Scott Robertson has instead chosen to entrust leadership to Barrett, who will be taking over Whitelock. Whitelock will be skipping next year’s Super Rugby campaign in order to take up a short-term contract in Japan, but he will remain contracted to New Zealand Rugby through 2023, and is expected to return to the Crusaders in 2021.

Robertson had said that his coaching staff were not at the team’s Rugby Park headquarters, when the media were given information concerning the 38 man squad that had been chosen for the 2020 season, but has also said that Barrett is the right man for the job. Barrett was named Crusader of the year after they had finished their three peat under the captaincy of Whitelock in July, and he now has the chance to captain the red and blacks for an unprecedented fourth Super Rugby title, and a record extending 11th overall.