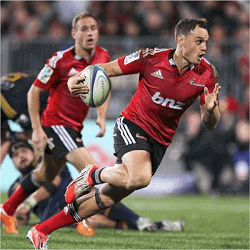 It has been almost a full decade since the Crusaders claimed their seventh Super Rugby title. If the drought doesn’t end soon, the Crusaders fans are in danger of giving up hope on one of Super Rugby’s most successful franchises. Visions of the 2014 final will forever haunt that fans when the team lost to the Waratahs in the lasts minutes of the game. Similarly, the 2011 loss to the Reds may cause some people to think that a win is not on the cards.

Crusaders coach Scott Robertson is one man who knows what it feels like to lose. He plans to use his extensive experience from his own Crusader playing days in order to drag his team out of the mud and claim title again. Speaking to the press, Robertson explained that in 1996 when he played for the Crusaders, they were in last place, which hurt a lot. The team then went on to win four titles with the same group, giving Robertson the opportunity to see both sides of the coin.

As a player and as a coach, Robertson has tasted success and has drawn from his playing days to get teams through to where they need to be. This is his approach with the Crusaders as they started preseason training last week. Robertson guided the Canterbury team to their third NPC title just two months ago before taking up the post of Crusaders coach. When it comes to preseason training, Robertson feels that the two weeks before the main Christmas break are essential to lay a solid foundation for the next season.

Most of the 38-man Crusaders squad is in Christchurch although many of the All Blacks are not expected to join until the 29th of January. Former Queensland Reds wing Digby Loane will join the team after completing his season with the Japanese club Honda Heats also towards the end of January. Once the All Black join the side, the team will assemble for a wellbeing camp to incorporate the players and form a cohesive unit.

The team will play a series of pre-season matches including matches against Hurricanes on February 14 and the Highlanders on March the 4th. The team will also make an appearance at the inaugural Brisbane Tens tournament from the 11th to the 12 of Feb. With the side fully intact, the Crusaders will face off against the British and Irish Lions in Auckland on the 24th of June.