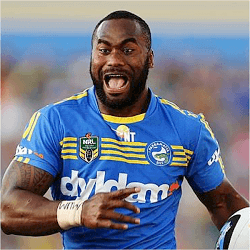 Semi Radradra, whose full name is Semi Radradra Turagasoli Waqavatu, is a professional rugby league footballer who at present plays in the National Rugby League, or NRL, for the Parramatta Eels. He is a Fijian, but plays as both a Fijian and Australian international representative winger, and the 24-year old was born on the 13th of June 1992, in Suva, Fiji.

He stands at 1.9 metres, and weighs in at 100kg, getting his career off to a blistering start in 2013. He has one sister, Vaseva Waqavatu, and his parents are Samisoni Waqavatu and Luisa Sera.

This troubled NRL star player has been reported to have signed a deal to link up with Toulon for the French Top 14 rugby competition, and this move has been heavily criticized. He will apparently begin playing for Toulon at some point in 2017.

Reports issuing from France have suggested that Radradra had signed the deal some days ago, and Fox Sports confirmed with Mourad Boudjellal, the owner of Toulon, that this move was, in fact, happening. Boudjellal was reported to confirm that Radradra had signed with Toulon for one year, and this deal further had a one-year option attached. Certain media outlets have suggested that Radradra would play for Toulon from 2017 onwards, Mourad Boudjellal did not go into these specifics, and neither confirmed nor denied the date that the deal would commence. Toulon also boasts a number of Wallabies players on its books, with this list including Matt Giteau; Drew Mitchell; Liam Gill; and James O’Connor.

Toulon managed to win the European Champions Cup for three years in a row, until 2015, and is currently in the process of rebuilding under the tutelage of Mike Ford, an Australian coach.

The issue seems to be that 24-year old Radradra has, in fact, signed to play with the Parramatta Eels until the end of 2017.

Arrest Warrant Issued for Radradra after Non-Appearance in Court

Semi Radradra is a renowned barnstorming winger for the Parramatta eels, but his fame is not doing him any good in the eyes of the law: Monday found him on the receiving end of an arrest warrant after he failed to appear in court on charges of domestic violence. Although he left Fiji late last week with permission from the Parramatta Eels to visit his father, who is sick with pulmonary tuberculosis, the magistrate was not happy with his absence, citing that the nature of Samisoni Waqavatu’s illness was ongoing and did not justify his missing the court date.