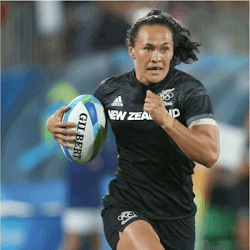 New Zealand’s Seven Sisters have managed to turn their bitter defeat at the hands of Australia at the Rio Olympics into a galvanising force that spurred them on to win the Dubai Sevens. They have managed to trounce their trans-Tasman competitors and make New Zealand proud.

Rebekah Cordero-Tufuga managed to score a try in each half of the match after Portia Woodman opened up the scoring in the tournament final which took place on Friday. The Seven Sisters managed a victory of 17 – 5 at the end of the day, a far cry from the setback they suffered at the Olympic Games in Rio in August this year.

There was a little extra energy in the post-match celebrations for the team from New Zealand, who did not take home a gold medal in the Olympics thanks to their 24-17 loss. The Seven Sisters performed their own version of the famous haka after they received their tournament gold medal and trophy, and were obviously ecstatic about their win.

Sarah Goss, the captain for the Seven Sisters, was reported to state that they were incredibly happy as a team, and that she was overjoyed at the results of their efforts in her personal capacity as leader of the Seven Sisters. She went on to say that they had a new team; were playing under new management; and that their win against Australia was wonderful, particularly in light of what had happened in Rio. She said that coming back was tough, but that the fact that they had managed to beat Australia in what was “probably [her] favourite tournament” was “exhilarating”.

Woodman, sin-binned in the Rio final, raced 80 metres to score the team’s opening try in the second minute of the game, getting things off to an extraordinarily good start. Kelly Brazier broke through Australia’s stoic defence just 10 meters out from the New Zealand line and discovered Cordero-Tufuga with a long pass for a 60-metre sprint to the line. Tyla Nathan-Wong managed a conversion off of the left upright, and this gave the Seven Sister’s a considerable lead at halftime of 12 points to zero.

When Cordero-Tufuga managed to add her second in the 11th minute, the Seven Sisters had their first-ever Women’s World Series tournament title since April of 2015 in their grasp, and they were determined not to let it slip away.