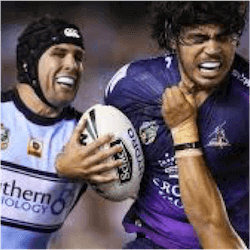 The Cronulla Sharks have climbed their way up to third place on the NRL ladder after a tense victory over the Melbourne Storm on the weekend. The defending premier champions relied on their solid defence to outlast the Storm for their 11-2 win at a very wet AAMI Park. In a rematch of the 2016 Grand Final, the Sharks failed to capitalise on several major scoring opportunities but managed to topple the home side with a clean sweep in the second half.

The visiting side handled the wet and slippery conditions far better than the hosts in the opening minutes of the game. With just ten minutes on the clock, the Storm had already lost possession three times in the Shark’s half. A Handling error close to the Storm line gave the Sharks the perfect opportunity to score the opening try. The play was called back though for a penalty against the Cronulla side at the scrum.

Melbourne’s first scoring opportunity came courtesy of Cooper Cronk who set up a 40-20, putting the Storm deep into Cronulla territory. The first points on the board came from Cameron Smith who kicked over a penalty from a high tackle against Billy Slater. A handling error from Suliasi Vunivalu close to the Storm line handed the Sharks another golden opportunity to get in front. But it was not to be as Jack Bird floated his final pass forward to Gerard Beale who had a clear run to the line.

In the second half, the Storm came out strong with a long run from Slater and a perfect high ball split form Valentine Homes. The Shark’s tough defence held out against the home side resulting in another handling error, which gave Maloney the opportunity to level the scores with a perfect penalty kick. The two-all deadlock remained until the 70th minute when James Segeyaro swooped in on a mishandled kick by Billy Slater finishing it off with a touch down under the posts.

The Storm kept the pressure on the Sharks line throughout the remainder of the second half. However, they failed to find their target with the boot, allowing the Sharks to claim Victory and effectively end the Storm’s opening season winning streak. The Sharks have now won three straight matches and seem to be getting better with each game.

If you love betting on the NRL, Sportsbet is offering some incredible promotions. Just one of the many include the NRL Rounds 8 bonus, and if your team wins by 6 points or more, you’ll get a 50% boost up to $50 in bonus bets