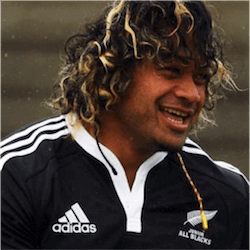 Rugby union fans the world over joined New Zealanders in grief on Sunday, as the news broke that former All Black Sione Lauaki had passed away. Cause of death had not been revealed at the time of writing, but since 2012 the retired flanker had been receiving treatment for heart and kidney problems.

Following the tragic news, tributes poured in from fans, sporting bodies and former teammates, including World Cup-winning All Blacks captain Sonny Bill Williams. The 1.94m, 115kg loose forward was only 35 years old, and “gone too soon” was a common phrase on social media memorials.

Known as much for his booming laugh as for his intimidating physical presence on the field, Lauaki is survived by his wife, Stephanie, whom he married in Rarotonga in 2014, and two children.

The Tongan-born player attended school in Auckland, and after starting his rugby career with the Auckland Blues in 2002, switched to the Waikato Chiefs for the 2004 Super Rugby season. He remained at Waikato until his retirement in 2010, playing a total of 70 Super Rugby matches for the Chiefs.

He was also selected for the combined Pacific Islanders team in 2004, an international Test debut that saw him score tries against the All Blacks, the Wallabies and the Springboks. His debut for the All Blacks came in 2005 against Fiji, and from 2005 to 2008, he won 17 caps and scored three Test tries.

The loss of Lauaki comes less than a week after the world mourned another rugby great. Legendary South African scrum-half Joost van der Westhuizen succumbed to motor neuron disease in his Pretoria home on February 06.

Van der Westhuizen, who scored 38 tries for the Springboks in 89 appearances between 1993 and 2003, was honoured with a public memorial service at Loftus Versfeld on Friday. The iconic Pretoria stadium was the scene of some of the most memorable matches in his 71-game career with the Blue Bulls.