State of Origin Loss for Blues 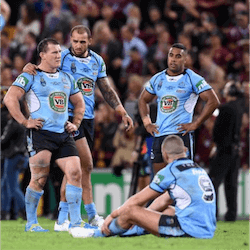 Queensland successfully defeated the Blues this week in a stunning comeback at the 2017 State Of Origin series. Queensland narrowly won the match by 2 points with the final score reading 18-16.

Queensland were the first to score in the match. An off the ball penalty was taken advantage of by the Maroons who used their field position to bank a conversion and gain advantage. Next Darius Boyd created a fast opening for Valentine Holmes who slipped past the defence along the sideline for a spectacular try. Jonathan Thurston then made a great conversion bringing the score to 6-0 within the first 10 minutes.

Push Back From Blues

Soon the Blues started fighting back. NSW stalwart Jarryd Hayne quickly claimed an equaliser for the Blues. They were working the Maroons in centre field when the ball slipped to the sidelines where Jarryd was ready and waiting.

The Blues continued their attack with James Maloney and Brett Morris pushing the team to a 10-6 lead. By now Queensland’s back row was clearly tiring and it seemed the Blues could smell the blood in the water.

Soon the match was standing on 16-6 with James Tedesco and Jake Trobojevic fully utilising the team’s momentum after their second try to push the ball over the line yet again.

Queensland managed to apply some pressure but they could not turn that pressure into opportunity. The Blues put up a solid wall of defence with Trobojevic and Josh Dugan being the solid foundation of that wall.

By the start of the second sequence, both sides had lost players to injury. The Blue’s James Tedesco received an ankle injury while Queensland lost Jonathan Thurston to a shoulder injury.

With a lot of support from the soft tackles by the Blues, Queensland lock Josh McGuire saw an opening and took full advantage. He broke open the Blues’ line and pushed through with support in his wings from Cooper Cronk and Will Chambers with Dane Gagai coming in to put the proverbial cherry on the cake with a try.

Amazingly Queensland took command of the second half with the final blow coming from Dane Gagai who scored a final try 2 minutes before the end of the game, sealing the Blues’s fate with a final score of 18-16. Both teams made a lot of errors and there were many opportunities for the Blues to snatch back the lead, but unfortunately it was not meant to be.