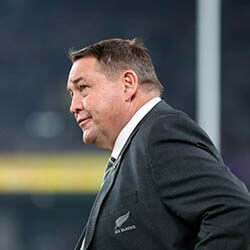 Former All Blacks coach and legendary New Zealand Rugby World Cup veteran Steve Hansen says he’s fully intent on helping to turn the Canterbury Bulldogs into the club everyone desires it to be.

The club on Wednesday announced the successful signing of the World Cup-winning Kiwi. Hansen will according to a statement by the Bulldogs serve the club in the capacity of high-performance operations consultant, providing advice and help in whichever area it may be needed.

Hansen’s association with Bulldogs head coach Trent Barrett started out as a result of a friendship struck following a period of time the Canterbury coach spent with the New Zealand national side. This was during Barrett’s term coaching Manly. Hansen reportedly on Thursday told a local newspaper of his excitement at the prospect of the Canterbury challenge, describing his willingness to sign with the Bulldogs as the result of his having “a lot of time” for Barrett – along with his wanting to help out his mate.

The role Hansen says he intends to fulfill is mainly that of an experienced sounding board to Trent Barrett. The young coach has a mammoth task ahead of him, said Hansen of Barrett coaching the Bulldogs. And it’s a task, said the rugby veteran, that will require of the young coach to lead a huge club with a rich national heritage back to a position of former glory.

Hansen also touched briefly on his intentions within the context of his ongoing coaching stint with Japanese club Toyota Verblitz. He said he has no intention of “cherry-picking” New Zealand’s best sporting talent for the benefit of the foreign side.