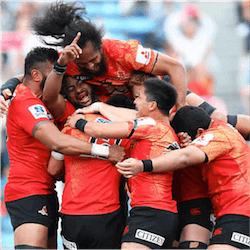 The Blues have officially made Super Rugby history, but not for the right reasons. Their humiliating 48-21 defeat at the hands of the Sunwolves has gone down as the biggest upset in Super Rugby this century. According to statistical data collected from 2000 onwards, this game ranks at the most unexpected where bookies, fans and everyone watching had an unfaltering certainty that the Blues would win.

Speaking to the press after the game, coach Tana Umaga said that they were probably the favourites going into the match. If ever there was an understatement, Umaga really nailed it. According to the stats, the blues were put in as 29.5 point favourites. No other team in Super Rugby history with this type of spread has ever lost their match. It was a historical day for rugby not only because the Blues lost, but because an underdog team such as the Sunwolves beat the betting odds.

Since the year 2000, a total of 1783 Super Rugby games have been played. Of these, the Sunwolves became the first team with odds of $15-1 to actually win their match. Looking at 49 bookmakers and averaging out the betting odds, the Sunwolves were priced at a massive $15.52. But despite the appealing odds, no one in their right mind would take that bet, such was the surely of the Blues coming out tops.

The Sunwolves Biggest Win Ever

The Blues do have some company as a top side that were toppled in Super Rugby though. In 2008, no one expect the Crusaders to lose a home game so early on in the season. This was when they lost 2-10 to the Highlanders, result, no one saw coming. Also, we can look at the Brumbies upset in 2002. After winning 13 straight games, the Brumbies were toppled by a bewildered Hurricanes side that delivered a magical performance on the day.

The Sunwolves, who are stone last on the log showed no signs of improvement in any way. In fact, they had just come off a 94 to 7 thumping by the Lions and a 52-15 defeat at the hands of the Stormers. If anything, Filo Tiatia’s side was playing exactly the way we all expected and predicted. It was possible that the Blues were lulled into a false sense of security. After racking up a heathy 21-7 point lead, the Blues stopped scoring and were blown away by 41 unanswered points.

The Sunwolves not only managed to win the match, they recorded their highest ever point total and their biggest margin of victory all in one go. For the Sunwolves, this match will go down as the best they have ever played. Meanwhile, Umaga says his team were not able to handle the pressure and expectations put on his team to win.