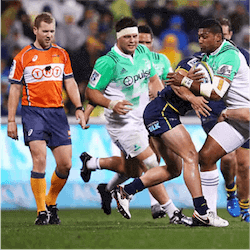 Worst Case Scenario for the Crusaders

The Crusaders might be riding high from their recent semi-final win, but this past weekend has also brought them a Super Rugby final the team desperately wanted to avoid. The Lions outstanding comeback against the Hurricanes means that the Crusaders will now travel to Johannesburg where they will face off against the Lions at Ellis Park.

While it was always suspected that the Lions had the ability to play well, their powerful second-half performance against Chris Boyd’s team has made everyone in New Zealand stand up and take notice. The Lions have a strong pack with a lot of pace in their backline and oodles of talent in their first five. That being said, the Crusaders are unlikely to crumble when it comes to the important set pieces the way the Hurricanes did.

What makes the Lions so dangerous is the dynamic, free-playing style that separates them from any of the other South African teams. This was a specific style brought through by coach Johan Ackermann. With Ackermann at the helm, the lions beat the Crusaders in the quarterfinal last year, but lost the final to the Hurricanes in Wellington. On the other side of the fence is Scott Robertson who is in his first year of coaching the Crusaders.

Already Robertson has exceeded all expectations, taking the side back to their original traditions of having a watertight defence and a dangerous counter attack. This was all clearly demonstrated in their victory over the Chiefs in the semi-final.

A Dream Final for the Lions

After losing the Hurricanes in Wellington, the Crusaders lost their chance to finish top of the log and enjoy a home final. When Boyd’s team collapsed against the Lions, all hopes of having a New Zealand advantage went swiftly out the window. If the Hurricanes had won, the final would be played in Christchurch. With things the way they are, the Lions are now the favourite to win their first ever Super Rugby tile. It might be a dream come true for Ackermann but it is a complete nightmare scenario for the Crusaders.

Speaking to the press, Ackerman said that the Crusaders are still a team to be reckoned with. He believes they are a quality side with nothing to lose and everything to play for come Sunday. Looking at their win against the Chiefs, the Crusaders really have their defence to thank for their win. Despite only holding 30 per cent of the possession in the semi-final, the Crusaders outscored the Chiefs by three tries. This is the type of inspired performance they are going to need to repeat if they want to claim the title next Sunday.