Teen Ponga to Play in Oz 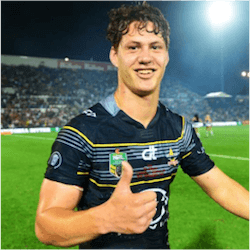 The 19-year-old player, Kalyn Ponga has been coveted for some time now by the major professional leagues. He is currently under contract with the North Queensland Cowboys but he has decided to make the shift to Australian Rugby.

It is believed he was included in an expanded Kiwi squad in order to gain him some experience as well as to convince him to stay with the Kiwi rather than make the move to Australia.

Ponga has had one of his best games of his life this past weekend for the Queensland Cowboys. They defeated the Newcastle Knights, the team Ponga will be joining next year in a multimillion-dollar deal.

A Life Of Achievement

Ponga was born in Western Australia and has a Maori father. This makes him eligible to play for both Australia and New Zealand. From a young age Ponga showed immense promise.

He soon became a member of the Rugby League Academy program in Australia and played on the junior league for Souths Mackay. He signed to a scholarship in 2011 with Central Queensland.

On To The Professionals

In December of 2013, Ponga moved to Brisbane and played for the Easts Tigers during the Cyril Connell Cup.

During this time he was pursued by 7 professional sports clubs, including the Sydney Roosters, the Queensland Reds, and the Brisbane Lions, but rejected them all to play for the New Castle Knights.

His first appearance off the bench was in a 50-6 victory by the Cowboys over the Parramatta Eels. By the end of the year he was the starting fullback with 8 tries scored in 8 games.

To Oz Next Year

He spent the majority of 2016 playing for the Cowboys and was named the fullback of the “Team of the Year”.  It also came to light that during the first few months of 2015, Pongo was fighting a life threatening infection of his brain.

This year Pongo will be representing North Queensland in the NRL Auckland Nines. He took the team straight to the quarterfinals where they lost out to Western Storm. Pongo walked away with 5 tries and another “Team of the Tournament” award.

Now Pongo has been officially signed with the Newcastle Knights and he is set to start the 2018 season with the team. The North Queensland Cowboys have declined to let him leave early.