The AVIVA Premiership Is Here 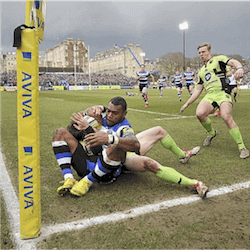 This Friday the 1st we will see the start of the AVIVA Rugby Premiership. It will kick off with current defending champions Exeter facing Gloucester.

The Premiership consists of 12 teams facing off over 22 rounds of fantastic Rugby action. You can get you bets in online at Crownbet and see if you can predict a winner.

Ranked 2nd in the Premiership but winners of last season’s finals, Exeter will have their work cut out for them. They have the benefit of a solid coach who has been with the team for 8 seasons and has helped mould the side into a domestic force.

Exeter is the target for the other teams this season as they now have a reputation to uphold. They also now risk losing their players to international teams thanks to their new found fame. The side has already parted ways with Dave Lewis, Will Hooley and they also saw the retirement of two veteran players Haydn Thomas and Tom Johnson.

The Wasps are still stinging after their loss to Exeter last season. The multiple Premiership champs are looking to make up for their loss this season. With Joe Launchbury leading the side, there is no reason why the Wasps cannot rise to the occasion once again.

The Wasps are playing it smart already by sitting Elliot Daly out of the first two matches in order to let the player recover from a packed 2016 season. They have also sidelined James Haskell until at least October. The player is currently making a recovery form a finger surgery.

To fill their gaps, the Wasps have made some surprise signings. They will be joined by Springboks Centre, Juan de Jong from the South African side, the Stormers. Paul Doran-Jones from Gloucester and Antonia Harris from Nottingham will also be joining the team.

Despite losing their star player Chris Ashton, the Saracens were not despondent for too long as they signed Liam Williams soon after. Paired with the 3 man back line attack of Alex Goode, Chris Wyes and Sean Maitland, the Saracens are many bookmakers’ pick for the new Champions of the 2017 AVIVA Rugby Premiership.

The Saracens have won multiple European titles but failed to perform during their semi-finals outing and they may have a chip on their shoulder this season. The Saracens will see the retirement of Kelly Brown, Tim Streather, Jim Hamilton and Neil de Kock, but they will be signing Wil Skelton form the Waratahs, Calum Clark from Northampton and Dominic Day from the Rebels, amongst others.