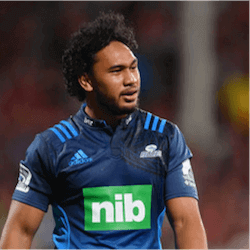 TJ Faiane To Make His Debut for Blues

The upcoming Super Rugby match against the Force could be an interesting game for the Blues. After a fruitless few weeks on the field, Rieko Loane has been asked to take a seat on the bench for the first time this year. While the decision did not come lightly for the team, the demotion of the Blues’ promising centre was the first real setback of the 20-year-olds career.

In 2016, Loane played two Tests for the All Blacks on their tour of Europe. He also had a brilliant Super Rugby season opener, scoring a hat-trick against the Rebels in Melbourne. However, since his brilliant performance against the Rebels, Loane has been less effective on the field. His inability to find any sort of form has prompted Blues Coach Tana Umanga to put him on the bench for now.

With Loane on the bench, TJ Faiane can come in as inside centre while playmaker George Moala gets shifted to centre. Saturday’s match will be TJ Faiane’s starting debut for the Blues. The 21-year-old was a former schoolboy rugby star but was plagued by injury in the first few seasons of his professional rugby career. Faiane made a bench appearance in the Blue’s two previous games including the memorable 38-14 win over the Bulls last week.

Umanga has scheduled one other change for Saturday’s upcoming match. Blake Gibson, the openside flanker will make way for the extremely versatile Murphy Taramai. After making a start in all five games this year, Gibson will join Loane on the bench while Taramai, who has only had a single start against the Highlanders will mix things up for the team.

To date, the Blues have lost a total of three games to Kiwi opponents. The good news is that their two hefty wins have come against highly rated overseas opposition. While they certainly have a lot to make up for, the team has the potential to keep improving.

On the other side of the coin, the Force are coming off a massive loss to the mighty Crusaders and will have an uphill battle against the Blues. As it stands, the odds are favouring the Blues. The Force have won just a single match in the last 10 clashes with the Blues and will have to work extremely hard to get pull themselves out of their losing streak.