Tom Curry Could Be The Next Richie McCaw 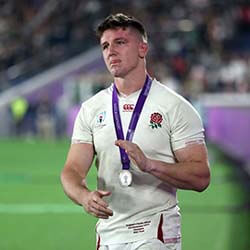 Tom Curry could turn out to be every bit as good as Richie McCaw. So predicts England forwards coach Matt Proudfoot. Curry starred in England’s 19-7 win over New Zealand when the two-time defending champions were knocked of the 2019 World Cup’s Yokohama-run. According to what Proudfoot recently told British broadcaster the BBC, the 22-year-old Curry is a very special player.

Proudfoot told BBC Sport that Curry had the perfect mindset in terms of growth and the realisation of the need for constant improvement. He also followed a relentless training regime, added the forwards coach, asks the correct questions for the right scenarios, and makes double sure he’s constantly adding the right sort of changes to his own personal game.

The England coach said it was easy to spot greatness in a player, and that once spotted, there is a realisation that such a player had the potential of going a very long way. Proudfoot said that judging by the way Curry had improved over the past four years, he would in another four years’ time be the next Richie McCaw.

The former All Blacks skipper played more Super Rugby Tests than any other New Zealander before him, living a career that saw him ultimately captain the national side to two World Cup wins. He’s widely regarded as the greatest loose forward in rugby, a feat that saw him take home an incredible three Player of the Year awards over the course of his stellar career.