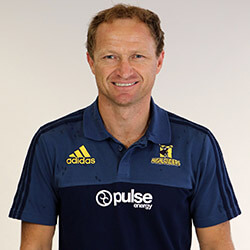 Highlanders chief executive Roger Clark says it would be “silly” for the team not to consider approaching Tony Brown to assume the role of new head coach. And since the number one priority now is to rope in the expertise of a world-class defense coach, there’s hardly a man better suited to replacing Aaron Mauger than Brown.

Clark was quick to add that appointing Brown as possible returning head coach, along with support in the form of Clarke Dermody, is at this stage of the game no more than something he and the franchise are “talking” about.

And since the Highlanders employ Brown, and not New Zealand Rugby, he would still be free to assist Jamie Joseph in Japan. Coaches employed directly by New Zealand Rugby aren’t permitted to coach another country’s national team – with Warren Gatland being the lone exception.

But the team’s obvious interest in Brown aside, Clark said there doesn’t appear to be a lack of interest in the position at all. Since New Zealand is hard to beat in terms of being just about the safest place to live right now, Clark says he won’t have any trouble bringing back any of a number of Kiwi coaches scattered the world over.

Even just Nathan Brown’s mere presence at the club has according to Clark been a recruitment drive all on its own – with Crusaders star Billy Harmon already signed to the squad from next year.

And it’s all as simple as players finding it particularly reassuring when Tony Brown is the one talking to them.