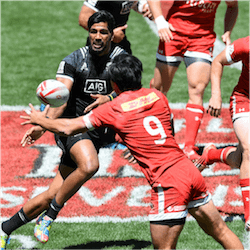 The 2016-17 HSBC World Rugby Sevens Series is taking a three-week hiatus, but New Zealand betting enthusiasts will have it among their options again from 7-9 April, when the Hong Kong Sevens take place.

There are, in fact, only four more tournaments left in the 2106-17 WR Sevens Series: the Singapore Sevens are on 15-16 April, followed by the Paris Sevens on 13-14 May, before the grand finale of the London Sevens, to be held at Twickenham Stadium from 20-21 May.

At this stage, it looks like English WR Sevens fans are in for a thrilling spectacle to end the Series in the revered arena, as England is the only side that has been able to win a tournament against South Africa in 2016-17.

The Blitzboks won the legs in Dubai, Wellington, Sydney and Las Vegas, and finished runners-up to England in Cape Town and the most recent leg, the Canada Sevens in Vancouver.

Apart from winning two legs, England also finished runners-up to South Africa in Sydney, but Fiji is also a threatening presence, after contesting finals against the Blitzboks and finishing second in Dubai, Wellington and Vegas.

New Zealand in Fourth on the Ladder

The top three sides are almost unassailable on the points ladder: South Africa on 126, England on 103 and Fiji on 100.

However, although New Zealand appears to be trailing badly on 84, that’s still 17 points clear of their nearest rival, the USA in fifth position. The highest that the New Zealand Sevens team has finished so far in the 2016-17 Series has been third, though, which they managed in Cape Town and Sydney.

So unless they can deliver superhuman efforts in the next four tournaments, coupled with a few obliging disasters from the South Africans, Fijians and English, hanging on to fourth place overall might be the best that punters can expect from them.