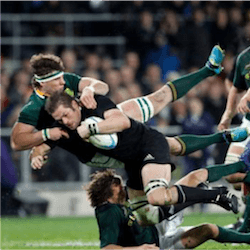 For the 15th time since the tournament was inaugurated as the Tri-Nations in 1996, New Zealand have won the Rugby Championship. The All Blacks’ 36-10 away win against Argentina on Saturday left them with an unassailable 24 points on the championship ladder, beating Australia in the Bledisloe Cup and South Africa in the Freedom Cup along the way.

Despite securing the Championship, Saturday’s game against the Pumas in Buenos Aires wasn’t the flawless display Kiwi fans were hoping for. It was more of a curate’s egg: in the first half, New Zealand played with the dash and brilliance they have displayed throughout the tournament, going into halftime 29-3 ahead.

But their discipline faltered twice, resulting in a yellow card for Matt Todd before halftime, and another in the second half for captain Keiran Read, whose high tackle on Pumas centre Matias Orlando could just as easily have earned him a red. The result was a lacklustre second-half from New Zealand that allowed the Pumas to cross their line, before an injury-time try from a five-metre scrum by All Blacks debutant David Havili decided the final score.

Kiwi sports betting fans could be forgiven for considering this Saturday’s match in Cape Town, when the All Blacks play the Springboks, a dead rubber, since the South Africans, on 13 points after another draw with Australia this week, have no hope of overtaking New Zealand. All Blacks’ fans might not be so cavalier: presumably, the Kiwis are now hungry to maintain their clean sweep in the 2017 tournament.

But South Africa’s performance at Newlands this Saturday could still make a difference to which side finishes the 2017 Rugby Championship in second place. Saturday’s draw left Australia on 10 points. If the Springboks finish their match against the All Blacks without a point, then all the Wallabies need in their game against Argentina later on, is a straight win.

If the South Africans lose by less than seven points and/or rack up four tries to secure one or two bonus points, however, then Australia will need a five-pointer later in the day against Argentina. With the All Blacks offered at betting sites at below $0.15 and the Springboks at $5.10, that looks unlikely, but Kiwi rugby fans will be on tenterhooks until their Argentina game is done and dusted.