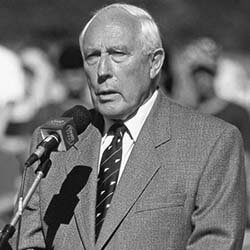 Iain Gallaway, the “Voice of Carisbrook”, has died. Born in Dunedin in 1922, and educated at Christ’s College and Otago University, the beloved rugby and cricket commentator died of natural causes aged 98.

The sports commenting stalwart commented on cricket for an incredible 40 years, and on rugby for 26, before finally signing off for the very last time in 1992.

After starting out his working career as a cadet reporter on the Otago Daily Times, Gallaway would proudly tell of how he had for as long as he could remember wanted to be a journalist. Life however had other plans for him, at least initially, and following his service in the Second World War, he switched to law.

After distinguishing himself in the field of law, Gallaway served as an officer in both the New Zealand and Otago Law Societies.

A keen cricketer himself, he played three A-class matches for Otago as right-handed batsman and wicketkeeper between 1946 and 1948. But it wasn’t until 1953 that the doors finally swung open for him to become a sports broadcaster. It would ultimately be an unexpected short-notice invitation  that would launch his 40-year sports commentating career, thereby also introducing to the world for the very first time the voice that would become synonymous with Dunedin’s Carisbrook sports grounds.

Gallaway would famously tell of how he had seen every rugby test match played at Carisbrook since 1930 – every test bar one.

The test missed was in 1999. By then President of New Zealand Cricket, Gallaway said he was during that particular match proudly occupying the President’s Box at Lords while watching New Zealand beat England – for what would be the first and also the only time.

Gallaway in 1997 published his autobiography, Not A Cloud In The Sky.