Warriors’ Reece Walsh To Wear No. 1 Jersey Against Cowboys 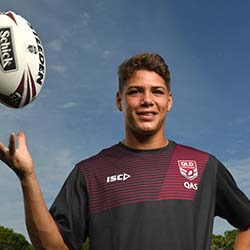 Nathan Brown, the coach of the Warriors, has announced that teenager Reece Walsh, the team’s wonder kid, will wear the no. 1 jersey for the first time when facing the North Queensland Cowboys. The game will take place on Friday night. Rocco Berry will return from a head injury suffered during the team’s match against the Parramata Eels two weeks ago.

The 18-year-old played with no. 17 on his back following a late call up from the bench during last Friday’s match with the West Tigers. The team won the game with 30 points to 26.

For the most part, Coach Brown has been very vocal about sheltering Walsh from the weekly rigours of the game. However, his hand has now been forced considering Walsh’s excellent showing against the Tigers coupled with teammate Maumalo’s injury. It seems that Walsh will no longer be starting games from the bench.

The Cowboys have been coached by Todd Payten, last year’s interim Warriors coach. For their match against the warriors, the team will be playing without Jason Maumalolo and Lachlan Burr. Both the middle forward and the former Warriors prop have been handed one-match bans for high tackles.