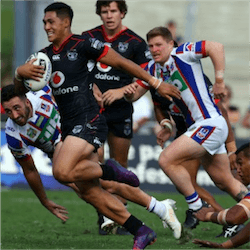 The New Zealand Warriors have continued with their bid to boost their league side with the signing of another New Zealand international for the 2018 season. This time around it was the turn of Kiwi international Peta Hiku. The extremely versatile back was handed a three-year deal and accepted it with open arms.

Having already been named in the New Zealand Ruby League World Cup Squad, Hiku was given an early release from his contract with the English Super League side, the Warrington Wolves. The early release means that he can join the Warriors on a permanent basis. Speaking to the press, Warriors CEO, Cameron George said the side was delighted to secure Hiku. According to George, he is a player that brings with him extensive international experience as well as a strong background in the Super League and NRL football. George also went on to say that Peta has the benefit of having a strong working relationship with Stephen Kearney which is major plus for the team.

Hiku and Love-Henry Join the Squad

Peta Hiku was is a former Warriors Junior who won the Under-20 player of the year award in 2012. Originally Hiku was contracted with the Warrington Wolves until the end of 2019, but an early release will certainly benefit the side that tried to get him on board in 2014 when he was still with Manly. Coming into the side, the 24-year-old will certainly improve the club’s depth and experience. He will also be part of a major boost in the back row joining fellow Kiwi test player Gerard Beal who was also handed a three-year contract a month ago.

As it stands, Hiku is now the fourth New Zealand player to sign with the Warriors for the 2018 season. He joins the likes of Adam Blair, Tohu Harris and Beal. Hiku is joined in his returned by Matiu Love-Henry who takes his place in the back row on a one-year contract. Having played 23 NYC games for the Junior Warriors, Love-Henry will be returning to the New Zealand shores after spending two years in Australia playing for the Norths Devils in the Queensland Intrust Super Cup. While he never really managed to break into the NRL with Brisbane, the side was impressed with his development when he was playing with the Broncos.