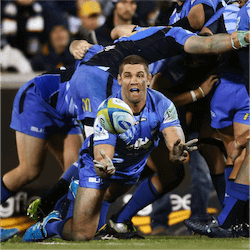 After suffering a 10-game losing streak, anyone at the Nib Stadium would think that the Western Force would have very little chance of putting one over a fired up Queensland Reds team. But despite a hat-trick of tries by winger Eto Nabuli, the Reds could not find a way to stop the Force, eventually going down 26 points to 19.

From the first blow of the whistle, the Force played like a team on fire. After a quick series of brilliant passes, winger Chance Peni ran across the line for the first try of the match after just 65 seconds of play. If the 7000 odd crowd at the nib Stadium were feeling any form of elation it was quickly replaced with shock and horror as Eto Nabuli scored two tries for the Reds in the space of two minutes.

The feeling of shock in the stadium wasn’t so much due to the fact that the Force were one try down, it had more to do with how Nabuli simply sidestepped Force defenders as if the field were his playground running a full 75 meters before planting the ball over the line. The action continued in the first half as Reds five-eight Quade Cooper suffered a hard blow to the face after clashing heads with Heath Tessmann.

Hope for the Force

Just before the break, the Force were able to level the score with Matt Philip scoring his first Super Rugby try in the 34th minute. At the break, the teams were evenly matched at 12 points apiece. In the second half, Peni was looking particularly dangerous when he got the ball but it was Nabuli again who kept the scoreboard ticking over for the Reds. After running down Paia’aua’s grubber kick, Nabuli ran the ball over the corner line for his hat-trick.

Before this game, Nabuli had only scored a single try in his previous 16 appearances for the Reds. After landing his third try of the match, the crowd were starting to feel a bit niggly in their seats. Despite Nabuli’s heroics, the Force were never really out of the contest and managed to produce the goods when it really mattered. Combining solid defence with inspired attacking phases, the Force kept their momentum going.

In the 67th Minute, Sef Fa’agase was handed a yellow card for a no-hands tackle which proved very costly to the Reds. The Force took back the lead in the 69th minute thanks to a gutsy try from Curtis Rona. The Reds did have a chance to even the score right at the death but the Force managed win the ball back and secure victory.