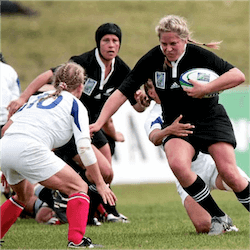 With the All Blacks pipping the Wallabies in the Bledisloe Cup, New Zealand rugby fans had even more reason to rejoice this weekend as the White Ferns claimed their fifth World Cup title in Belfast. After winning four-straight World Cups, the New Zealand women’s rugby team failed to make the semi-finals in 2014, leaving England to take the honours in Paris.

On Sunday, the White Ferns were able to restore New Zealand’s supremacy to the sport by reclaiming the title and adding to an already overflowing trophy cupboard. Making up a 12-point deficit, the New Zealand side ground out a difficult first half to recover in the second. Eventually winning by 9 points, the final score was 41 points to 32.

The game got off to a slow start until New Zealand flanker Sara Gross being was handed a yellow card. England ceased the opportunity and quickly took a 17-5 lead. The Black Ferns played hard and were rewarded with a try just before half time. Going into the break, England led 17-10. The second half of the game was completely one sided. A boost in moral brought the White Ferns fully into the game playing phase after phase without much resistance from the English.

Natua Picks up Player of the Match

Making ground quickly, New Zealand scored the first try of the second half courtesy of Natura. This was quickly followed up by a Stacy Waaka play, finished off by Charmaine Smith, giving New Zealand the lead for the first time. England hit back with winger Lydia Thompson scoring her second try off a New Zealand Cross kick.

England’s lead didn’t last long as Natua completed her hat trick in the third quarter, earning her player of the match. Portia Woodman, who had been quiet on the wing created a break for Kenda Cocksedge to put another one through. The final try for New Zealand came courtesy of Winiata with 11 minutes on the clock.

England had a small bit of hope when Lesley Ketu was handed a yellow card, leaving New Zealand with 14 players for the remainder of the match. England did manage to get a consolation try through a rolling maul, but it wasn’t enough to undo the huge lead created by the White Ferns. Speaking to the press, England captain Sara Hunter said that they just lost their momentum and were not able to get their hands on the ball in the second half.