Wiki Returns To Rugby at Nines 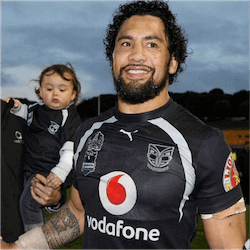 Ruben Wiki Comes Out Of Retirement For Auckland Nines

Former All Blacks captain, Ruben Wiki will be making a surprising return to the professional rugby field for the Auckland Nines. Ruben played his last match 8 years ago and has since been working as a coach. He is the strength and conditioning coach for the Warriors.

Wiki jokingly said that he wouldn’t have time to bark out orders as much since he will be trying to catch his breath most of the time. Wiki has not gone into retirement and sat on his laurels.

Other than training the Warriors, Wiki has been competing in marathons and Iron man events since his retirement.

Wiki has said he has enjoyed the challenges he has faced after he ended his 312 professional match career. He has said he is refocusing on match specific training top get game ready. This return to rugby by a retired player has not been unprecedented in the NRL.

Wiki has wanted to return to rugby for a few years already and now his return is supported by Warriors coach, Stephen Kearney.  The decision still has to be approved by the NRL but all things seem to be on track for Wiki’s return.

His team mates in the nines as well as former team mates have shown nothing but support and total confidence in Wiki’s return. Wiki is also no stranger to the game.

He has previously participated in the Super League Nines in 1996 and 1997 with his team winning both events.

When asked about his former team mate, Kenny Nagas return to the nines as well, Wiki said that they had previously talked about themselves returning to professional rugby and that Nagas just laughed when he told him that he will be returning as well, shortly after Nags returned to the game.

Wiki said that despite the fact that he is turning 44 soon; he is not intimidated by the concept of getting back on a field with younger players.

He said that age is just a number, however he would have preferred returning to the game 3 years ago. The fans and teammates however are happy it has happened at all.