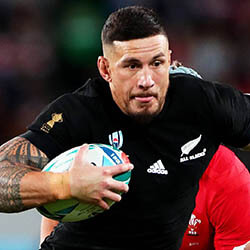 Sonny Bill Williams has just signed a deal worth millions of dollars with the Toronto Wolfpack Rugby League team. They’re set to make their debut in the Super League on the 2nd of February against Castleford and Williams can’t wait to get back in the game.

He’s well aware that he’ll need to prove himself worthy but says that he’s confident that his skills are still there. Brian McDermott, the coach for the team, says Williams needs time to adjust, but there’s no reason to doubt that he’s got what it takes.

The games will mark the return to League for Williams after a five-year hiatus, if, as is expected, he is selected to play despite only starting training with his new team this month. But the 34-year old emphasised that he’s not interested in featuring in next year’s World Cup just yet. He wants to prove that he can still perform first.

He said that even considering playing for New Zealand or Samoa next year is out of the question right now because he’s been away for five years. He’s let it be known that at this point he’s 100% focused on mastering the 13-player game and he’s determined to make it work.

Fans will recall that Williams is the second-ever person to represent New Zealand in Rugby Union games after playing in Rugby League. He’s also one of just 20 players who has won multiple World Cups.