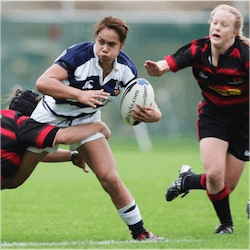 The Women’s World Cup Final is set for Saturday with the two titans New Zealand and England facing off against each other. These two sides have fought tooth and nail to make it here. The sides are very evenly matched ensuring a fantastic game ahead for both fans and bettors.

Most bookmakers are favouring the English side to win with odds of 8/11 on England, 6/4 on New Zealand and a 22/1 on a draw game. England has had a tough battle to make it to the finals which may be an indicator that they won’t go down without a fight. New Zealand however has shown amazing form in their journey to the finals.

They are a fearsome team and the inclusion of Portia Woodman on their side is their secret weapon. She is an amazing winger who is the tournament’s top scorer so far. She has made 13 tries, almost twice as many as the next in line, Canada’s winger Magali Harvey.

When we look at the history of these two sides we see that England has not won a single game against the New Zealand women’s side. The two teams faced each other in 2002, 2006 and in 2010.

On all three occasions England lost by 10 points or less, making them debatably close games. With this coming final England will be on near home ground in Belfast which may be enough of an edge for them to capitalise. Ideally England will use Katy McClean to pin New Zealand back in their half with her kicks.

New Zealand back, Kelly Brazier has stated that they will be focusing on England’s strong rolling mauls and line outs and attempt to take advantage of any mistakes made there. If New Zealand keeps up the form they have shown in the tournament so far, they could be taking home their 5th Rugby World Cup title.

The Lead-up To The Finals

England made their way to the Women’s World Cup Finals by defeating France last week. By the game’s first half, both sides were at a stalemate with the teams on 3 each. The second half however was when France’s game fell apart and England walked off victorious 20-3.

New Zealand made it to the finals after decimating the USA 25-12. New Zealand scored 7 tries, completely embarrassing the American side who simply could not keep up with the assault of New Zealand. This may be foreshadowing this weekend’s finals face off.